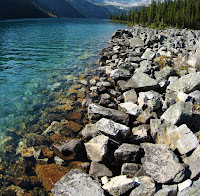 These last couple of weeks I have spent most of my time at work. D'OH!! But that's okay, for two reasons: ONE) The weather is definitely changing... fall feels like it is in the air, and we are approaching the time of year where it is getting harder and harder to find stuff to do outside... and TWO) We are leaving for Australia in a month, for a month... so I am grateful for the extra work shifts, both for the $$$ and for the additional days off I am accumulating...
Yesterday, Todd and I took advantage of the sun and decent temperature, and we zipped up to Boom Lake. This was the perfect outing, because I just came off nightshifts and was TIRED, and also because I have some stupid leather boots that I have been having trouble breaking in. The trail to the lake is a flat, easy 5km... however I must say it felt like FIFTY because my feet hurt so darn much!! Good thing for duct tape!! The nice scenery and great company was a welcome distraction for sure, and the lake is definitely beautiful - it was more than worth the minimal effort!!
Today it is a bit more blustery (did I mention that fall feels like it's in the air??), so I'm not sure what we'll get up to. Maybe something simple like a ride up the Banff Gondola and a traverse of Sulphur Mountain... that's my idea, anyhow... just need to convince my partner... We have some errands to run in Banff, so I thought it would fit in with our day perfectly.
Tomorrow at some point, it is back to Red Deer... for the usual weekend dayshifts and some OT on my two weeks off. I should make it back to Canmore sometime next week though, and if I'm lucky, get outside a few more times!!
Cheers!
Boom Lake
Time (car to car): 1-3/4 hrs
Distance: 10.2 km
Elevation Gain: 175m

Posted by Cheryle at 8:39 AM 1 comment:
Labels: Canadian Rockies 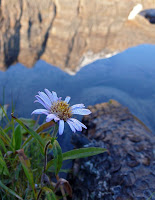 That's about what this past two weeks has amounted to for me... I've put on a few miles and gained and lost some elevation... it has been STELLAR!! It's probably been the best two weeks I've spent in Canmore, in recent memory, for sure!
My days off wrapped up with a quick overnight trip into Arnica Lake and Upper Twin Lake with my friend Brad, where we tried fishing but didn't have any luck - although we came to the conclusion that Upper Twin was EMPTY... And yesterday we checked out a new climbing crag at Castle Mountain - however I wasn't that impressed and likely won't head back there any time soon...
Now I'm back in Red Deer, prepping for another stint of work. I do get some days off here and there and will definitely spend them in the mountains if the weather permits. Maybe I'll be able to add to the stats??!! Yeah!!
Cheers!
Posted by Cheryle at 8:13 PM No comments:
Labels: Canadian Rockies

Well, a fantastic long weekend with my sister just came to a close... I drove her back to the airport this morning, where she jetted off back to sun and heat! Heather arrived from Phoenix on Thursday night, missing the best weather we've had all summer by HOURS... D'OH! But, there's really nothing you can do about the weather, so over the past four days we made the best of it I'd say:
- Friday: sunny, windy day, so we hiked to Sparrowhawk Tarns (~10.5km, 600m elevation gain) and then made a quick stop at Grassi Lakes (~4km, 250m elevation gain)
- Saturday: beautiful, sunny, warm day, so we hiked to the top of Mt Indefatigable (~8km, 1000m elevation gain)
- Sunday: rain! so it turned into a movie / chill-out day
- Monday: cloudy, sprinkly (snowy!) day, so we hiked to the Galatea Lakes (~17km, 725m elevation gain)
I hope she enjoyed herself - it is quite a different environment than where she lives, for sure... but she is a marathon runner (hence in fantastic shape!!) and I had a hard time keeping up with her! It was sooooo great to hang with her and get out and do some fun stuff with her... maybe she'll come back again next summer??!! Yeah!
Not sure what's on the agenda for the rest of the week... I go back to work on Monday, so I still have a few days to enjoy the outdoors... hopefully the wintery weather will subside somewhat??!
Cheers!
Posted by Cheryle at 11:41 AM 2 comments:
Labels: Canadian Rockies 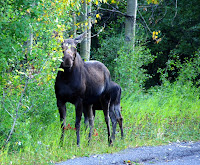 Well, today I learned a couple of interesting things about myself. It all began with me getting up at 6am... I stopped for breakfast and then headed out to Kananaskis Village with the plan to hike up to Mt Allan, via Centennial Ridge. To start with, I was the first car in the parking lot... a very BIG, empty, unfamiliar parking lot... and for some reason this just weirded me out - visions of being axe murdered or mauled to death on the trail ran through my head for a fleeting moment - I must watch too many movies!! I was actually feeling soooo jumpy that I think I lurched off the ground and gasped when a beautiful cow moose and her baby came out of the trees near where I was parked. It took me a second to recover from my stupidity/irrationality and grab my camera for a quick pic.
I learned at that minute, that while being in the parking lot by myself wasn't a problem, the fact that I may be the only person out on the trail shortly thereafter was what was creeping me out. Huh?? But it was going to be such an amazing day... and it's a fairly popular area... how could I be so silly? C'mon! Alright, so I semi-talked myself down from that particular ledge, but I admit I still doddled around, packed and re-packed, peered into the bushes... basically PROCRASTINATED... and felt huge relief when another car pulled up right beside mine. I would have been ecstatic had they been doing the same trail as me, however just knowing that some other human beings were going to be in the vicinity, really calmed me down. Strange, I know. So off I went - more than 3o minutes after I arrived! Tsk.
About 2-1/2 hours up the trail (with no end in sight!), I learned that even though I enjoy (and NEED) my time and space alone, I much prefer engaging in these long, drawn out hikes with someone else along for company. Perhaps it was because I was somewhat tired to start with? but the feeling of monotony set in real quick... and that, combined with the relentless steepness, soon grated on my nerves. Plus, taking pictures is more fun when somebody else is in them!!
I also learned though, that I can perservere if I have to - or really want to. "Stick-to-it-ive-ness" I think is the technical term... which is how I ended up making it through the claustrophobicly dense trees, up the switchbacks from hell over some meadows, along blocky, freakishly windy ridges, and over a seemingly never-ending loose pile of rubble to the summit of Mt Allan.
Now I'm sure it's not sounding this way, but overall, I must say it turned out to be a great day. The skies stayed clear and the temps were perfect. I gathered another rock for my collection. And I got to take some photos. How bad could it have really been?? Heh heh.
In my opinion however, the guidebook's and map's descriptions of the whole event are slightly embellished. The reward for effort ratio I thought was low, and there are other trips I'd recommend before this one. Unless of course you have a couple of people to go with! Also, make sure the weather forecast is good for the entire day... you spend alot of time on high, exposed ridges and it would be a terrible place to get caught in a thunderstorm.
Cheers.
Mount Allan via Centennial Ridge
Time (car to car): 6 hrs
Distance: ~14km
Elevation Gain: 1400m
Posted by Cheryle at 5:25 PM 1 comment:
Labels: Canadian Rockies
Newer Posts Older Posts Home
Subscribe to: Posts (Atom)