To see if that old adage holds true, I guess I'm going to have to make one more attempt at something along the Icefields Parkway... because the last two tries (including today) have pretty much skunked me! That darn, unpredictable, Alberta mountain weather!! LOL!

So... instead of being about some beautiful hike... this post and most of the photos are going to be related to driving. Yes, as in, driving a vehicle. I left Red Deer at a crazy-early hour this morning, to meet up with a friend out at Bow Summit / Peyto Lake. The forecast was awesome and everything was super duper until I reached Saskatchewan Crossing.

﻿
﻿
The plan was to go into Caldron Lake, which looks (from any descriptions we could find) to be an interesting trail up to a cool, tarn-filled, alpine cirque. We met at the trailhead and proceeded to traipse just over five kilometres along the abnormally fast-flowing, glacier-fed inlet stream above Peyto Lake. Right around the 5.5k mark, we should have come to a bridge which would enable us to cross to the other side and continue on up a moraine, along a headwall, and ultimately to the lake.


However, after roaming back and forth along the moderately raging creek for about 30 minutes, we were unable to find neither the bridge nor a suitable, safe place to ford. D'OH! We decided to wander back downstream and see if there were any crossing possibilities we may have missed... and low and behold, look what we found:


Yep, that log in the background is one of two that used to be cabled together and suspended across the water (the second one is near it but not really visible in this pic)... alot of good they're doing, laying where they are!!  **UPDATE: Apparently, the bridge has been out for nearly a year! Check out the ACC report on access to and from the Peyto Hut.**

Well we had a good laugh at our misfortune (it was so minor compared to another group of peeps we saw - that's a different story!), and then we actually were glad about our misfortune... because a squall blew in and it started to pour rain like mad! Had we been able to get to the other side, we would have ended up in a much higher and way more exposed location when the storm hit, and we would have been terribly unhappy campers. In this instance, we simply turned around and made our way quickly across the flats and back into the shelter of the trees.

By the time we were within a kilometre of the parking lot, the rain subsided slightly and we stopped for lunch at a great viewpoint overlooking Peyto Lake.

The clouds emptied one last downpour on us, and when I got back to the car, my clothes were soaked, my backpack was soaked, almost everything INSIDE my backpack was soaked... And the worst part: This whole adventure only lasted about 3-1/2 hours! So basically, my drive-to-hike time ratio was around 2 to 1. Meaning I drove for nearly twice as long as I hiked... and let's not even get into the drive-to-hike distance ratio...!!

Anyway, of course the skies got more and more clear, the further east I travelled. Which was a little disappointing but not surprising! 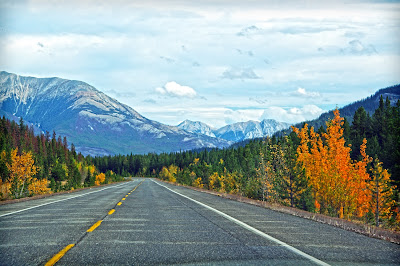 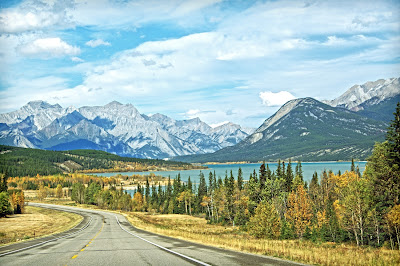 You know what though, I really shouldn't be complaining AT ALL, because as we all know... a bad day in the mountains beats a good day at work, any time!!

Time Not Spent At Work

Fall is definitely here, and can I just say EGAD! Where the heck has the time gone!? This past weekend however, I was fortunate enough to squeeze in a couple more days of outside time - yeah!! On Saturday, I drove a chunk of the Icefields Parkway with a friend who has lived in Red Deer for years but has never seen the Columbia Icefields! Unfortunately, north of Saskatchewan Crossing, we ran into blizzard-like conditions and didn't get to see much of the glaciers... But to the south, the weather was a little better and we were able to zip into Bow Glacier Falls - what an awesome walk!

Sunday was much nicer, temperature and sunshine-wise, and I dragged Toni and Vida up to the Barrier Lake Fire Lookout atop Yates Mountain in Kananaskis. 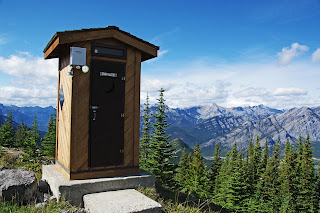 ﻿
The views were beautiful, and the day ended up being so clear that we could see the Calgary skyline from the fire lookout! What a gorgeous afternoon it was - thanks ladies, for joining me!
Well, if EnviroCan is to be believed, after today we are in for a fabulous week - I'm keeping my fingers crossed! It would be great to spend a few more days this season out enjoying the Rockies.
Cheers!
Posted by Cheryle at 5:38 AM 1 comment:
Labels: Canadian Rockies

....Mr & Mrs J and Jody Mills!! Yeah!! Two of my favorite people on the planet got married on Saturday, and I was there to photograph the festivities! 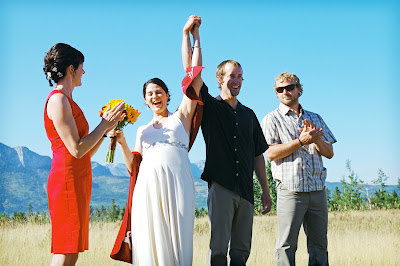 It was a most fantastic day, it went off without a hitch (well, except for the bride and groom getting hitched of course!! ha ha!), and I am so happy for them! Congratulations you crazy kids!!
Check out a sneak peek of the wedding pics here!
Cheers!
Posted by Cheryle at 6:36 AM 1 comment:
Labels: Personal

For those of you who had to work today, please accept my deepest sympathy!! It was an unbelievably stellar day, and I was able to skip work and enjoy the sunshine and blue skies in the mountains. Darcie, Monique, Kirstin and I lollygagged part way around Emerald Lake and up into Emerald Basin - talk about a beauty hike! The scenery is very pretty, and now that summer is 'officially' over, we almost had the trail to ourselves.

We hung out in the sun, ogled the peaks around the basin, and marvelled at our good fortune... it's the first week of September already yet it was a cloudless, +25C day! Yeah! 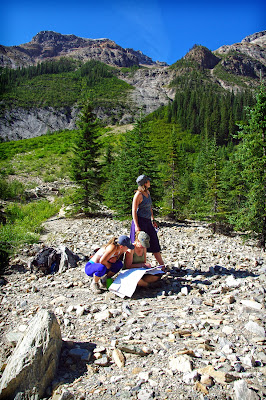 Thanks girls, for joining me today! It was awesome to see you and I'm excited to see you again in just four more sleeps!! Have a great week!