This morning I got up and drove out to Kananaskis Village, to meet one of my bestest friends for a hike. And in all honesty, if it weren't for the fabulous company, the venture would have been a bust for sure. Contrary to yesterday's trip, there was very little 'wow' factor to this trail. It rambled up a boring logging road for the first half and then through thick forest for the second. Views were pretty much non-existent until the very end, and if you know me, then you know that I hate spending alot of time in the trees. And today, I spent 16km worth in the trees. Booo.

Oh well, I'll stop whining already! The weather was gorgeous and the conversation was great, and I still managed to snap a few pics. Even though the scenery wasn't the best, it was still nothing short of awesome to spend the day in the mountains!

I had such a good time catching up with Jody and am grateful I got to hang with her for the day. Thanks so much Jodes!! I miss you and look forward to seeing you again soon!

My friend Lynn joined me today for a fabulous walk up to Wilcox Pass. What a day!

This has got to be one of the most scenic trails I've ever been on. The pass is expansive beyond belief and the Columbia Icefields dominate the scenery. Plus the trail is easy-peasy! The only down side to it is the crowds. We went early so we missed most of the gong show... and we also had time for a jaunt over to Wilcox (aka Nigel) Lake.

The skies were clear and the temps were warm, but it was moderately windy - which is to be expected I guess, since it is a pass after all.
A great friend, and a great hike - it was a fantastic way to spend the day! Thanks so much Lynn!
Cheers!
Posted by Cheryle at 8:54 PM 1 comment:
Labels: Canadian Rockies

What an awesome couple of weeks it has been! We just got back from a great camping holiday in the southwest corner of Alberta. There wasn't really a plan in place when we left - following the sunshine was pretty much the only thing on the agenda... and we got as far as the Pincher Creek / Waterton area and that is where we hung out. It was absolutely fabulous!

Between hiking and kiting and beach time, we visited several lakes including Oldman Reservoir, Keho Lake, Waterton Lakes, Cameron Lake, Wall Lake, Upper and Lower Rowe Lakes, and Crypt Lake. Of course I would have loved to have seen more (read: every lake in Waterton Nat'l Park!), however there are only so many hours in a day and only so many days in a vacation.  **SIGH**  But I'm definitely not complaining - I had so much fun and am sad that it is over. 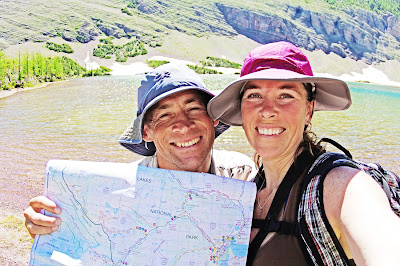 Now. Are you ready for this? Since I didn't take my laptop with me, I was not able to post while I was away. Which means that I have a ton of pics to share... and about a quarter of them are coming at you in this one MASSIVE SLIDESHOW. Note that it may not start properly on the first try... not sure what the problem is...? At any rate, enjoy!

The past three days have been super fun! Friday and Saturday, Todd and friends had a couple of wicked kitesurfing sessions at Gull Lake, and today, Todd and I spent the day in Kananaskis.

Here are a few pics of crazy Peter M. and his fluorescent green board at Gull yesterday:

Todd and I got up early this morning and drove down to Kananaskis Village where we proceeded to hoof-it into Ribbon Falls. That has got to be the easiest trail in K-Country - confirmed by the fact that everybody and their dog was on it... literally! It was quite busy, but it was still awesome to be out enjoying such a fabulous day.


The falls are impressive, and we explored above them with the intent of checking out Ribbon Lake (which we got to see last year from Buller Pass). After the first set of chains up the cliff band however, we decided that we had gone far enough, and we turned around and headed back down to the car.

Tomorrow, the usual work grind awaits... but it's tolerable this week because on Thursday, I start some summer vacation... and I can hardly wait! No travel plans are set in stone yet - it will be a last  minute decision that will heavily depend on the weather. Come on, Sun!!


Ribbon Falls - including ascent to the cliff face on the headwall
Time (car to car): 5 hrs  (1-3/4 hrs to the falls)
Distance: ~20km
Elevation Gain (to headwall): ~500m
Posted by Cheryle at 10:29 PM No comments:
Labels: Canadian Rockies, Miscellaneous Kiting

The weather has been nothing short of WEIRD lately. Check out the groovy cloud formation above our house last night: Apparently there were tornadoes in the area, strong winds and nasty hail... none of which made it our way, thankfully.

Today, the windy-ness continued, and for a few hours before a rainstorm blew in, Todd kitesurfed out at Aspen Beach. His was the lone kite on the water! 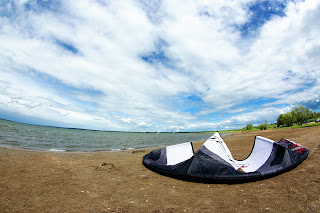 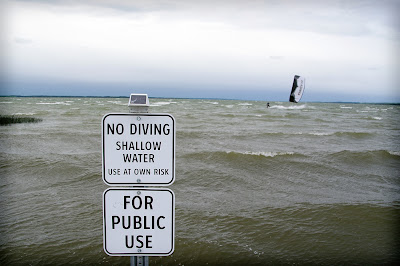 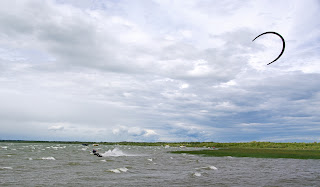 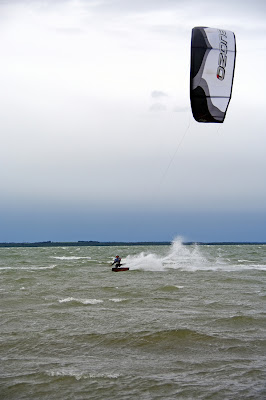 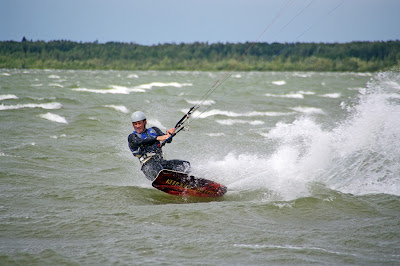 Tomorrow is calling for more of the same, so we'll likely be back out at the lake. And then Sunday... hiking! Yeah!

What a great day! Today I took a leisurely stroll into Rummel Lake with a large group of folks from the Canmore Hiking Club. It was super to see a few familiar faces from last season: Andrea, who is a geologist and hiking guide extraordinaire; Michael, an accountant who's wife is expecting their first baby any day now; and Karen, a teacher who's career has taken her to some amazing places around the world. I also got to meet many cool new peeps as well, including David, a construction company owner who knows more about wildflowers than possibly anyone, and Ward, who is an environmental specialist originally from the Netherlands.

July 3rd - and there is still ice on the lake! And a fair amount of snow remains on parts of the trail, too. But all in all, we timed the trek perfectly. The early start boded well for us, because just as we were heading back, the rain began!

I was on the road for home by about 3pm this afternoon, and I'm sure I had a smile pasted to my face the whole way. My weekend was fantastic, and I look forward to getting out again SOON!!

And I'm not talking about the time zone, either... I'm talking real, live, in-the-mountains time!! This weekend I finally got to get out onto some trails, and it has been awesome! Todd has been a great sport about the whole hiking thing also. I know he'd rather be kiting, but I appreciate that he has humored me these last two days and joined me for some fresh, K-Country air. When I say 'humored', what I really mean is that he listened to me whine and complain about how out of shape and slow I am, and mostly he just made jokes about it. Thanks Sweetheart!! Hee hee.
Anyhow, we spent Canada Day on King Creek Ridge, which was steep but led to fabulous views.

The sun came out once in a while and we lollygagged on the nice, grassy meadow at the summit for nearly an hour before taking a different, more scenic return route. The best part of the day however was when we were almost back to the car - we came out of the trees to a frantic lady yelling "Bear!", and sure enough, we darn near walked right into a momma grizz and her two tiny cubs. We watched them for quite some time; she was gorgeous and the babes were soooo cute! 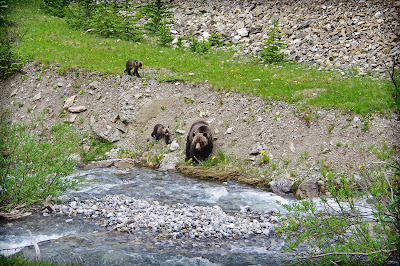 Today we drove down to Highwood Pass, since I've never been there before. We hiked the Picklejar Lakes trail to the col before you drop over down to the tarns, but instead of going down, we went up. We topped out on the start (or end?) of Lineham Ridge, which was very cool. The views were fantastic and had it not been only my second day out this year, I might have had the nerve to follow Todd further along the scrambly part of the ridge. 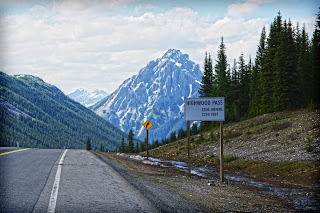 So far, it has been a stellar weekend, and tomorrow should be more of the same - I'm going to Rummel Lake with some friends from Canmore.

**SIGH** There really are few things more therapeutic, for me anyway, than being outside, wandering around in the mountains. Life.... is.... GOOD!!