The Arecibo Observatory is one of the neatest places I've ever been! Today we drove through the dense, jungle-y Puerto Rican countryside, over narrow, curvy roads, to what seemed like the middle of nowhere... and all of a sudden the world's largest single radio telescope appeared! Very cool. The telescope was built in the early 60's and is still used today, to record and study radio waves from outer space as well as from our atmosphere. The interpretive centre was great; it was pretty much overflowing with information and exhibits. Of course I could have stood on the viewing platform all day, as I found the massive structure to be fascinating! I highly recommend checking it out if you are ever in PR.
Later this afternoon we stopped in Barceloneta at a giant outlet mall... my friend Toni would be drooling!! But we only just wandered around, we didn't actually buy anything. And this evening we are hanging out in downtown San Juan... in the rain.
Anyhow, tomorrow we head home, back to what's left of winter! By the looks of the Central Alberta forecast though, the temps aren't even half bad. So we'll see ya all soon!
Cheers!
Posted by Cheryle at 5:34 PM 1 comment:
Labels: Virgin Islands / Puerto Rico 2010

After two weeks of intense sun and heat, we enjoyed the moderate temps and rain showers in Puerto Rico today. This morning, we landed in San Juan, bid farewell to our shipmates Peter and Sandy, and drove our rental car to Rincon, where we checked out the gnarly seas and cool surf scene. We are staying at a groovy little place called the Lazy Parrot Inn, and tonite we had what I think was the best meal of the trip at the restaurant here. The landscape along the whole north coast is dense and lush; and San Juan itself looks like a beautiful city. Tomorrow we are going to the Arecibo Observatory to see the world's largest radio telescope. There is an interpretive centre, and Todd is humoring the nerd in me by checking it out. Then hopefully we'll head to Old San Juan later in the afternoon.
**Whew** I am liking the weather here... it is nice to not be sweating profusely, continuously! But I know I should be enjoying it rather than complaining... since a bunch of that chilly white stuff is awaiting my return! Ha ha!!
Cheers!
Posted by Cheryle at 5:32 PM No comments:
Labels: Virgin Islands / Puerto Rico 2010 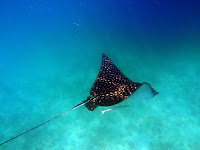 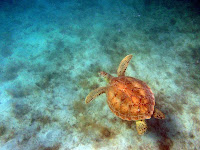 Ha ha!! We can officially say that now... since we've sailed this past week, completely on our own! It has been fabulous - although I must admit, I had a few episodes of serious nervousness... this is all still so new to me... But the positive aspects of the whole adventure waaaayyy outweighed any negatives I may have experienced, for sure. And I look forward to the next time that Todd and I will charter a boat and put our new skills to the test. It will be a monohull, by the way. The catamaran, while it was super comfy when stopped, was a total PIG to sail. The monohull on the otherhand, even though it moved about a bit more when anchored or moored, sailed like a dream - it felt much more stable in bigger swells and the rigging was easier to handle, especially for two people.
At any rate, we are now in Nanny Cay on Tortola, after sailing this week from Red Hook on St Thomas, around St John, and back to Red Hook. The bays we moored in around St John were amazing! We pulled into one bay, and immediately saw manta and leopard rays, sea turtles, and a nurse shark. Just south of the island, we watched whales breach for about an hour. We found a cool trail to hike which took us to the top of Ram's Head, and we explored an old abandoned rum factory and a sugar mill. The snorkeling everywhere was stellar, as well. Wow, we've seen so many beautiful things, I can't believe it! It has really been a most fantastic trip. And did I mention the weather??!! Average temps of 30-32C, every day... unreal...
This morning, we dropped off the boat in Red Hook on St Thomas, and took a ferry over to Soper's Hole on Tortola, then we hopped in a taxi and came back to Nanny Cay. Tomorrow we are flying to Puerto Rico, where we are renting a car and touring the island for three days. Then... home!!! Booo. Oh well. We've had sooooo much fun!
So... here are a few more pics... the next post will likely be from PR somewhere in the next day or two. Hopefully everyone back in the real world is well! Hee hee!
Cheers!
Posted by Cheryle at 2:42 PM 1 comment:
Labels: Virgin Islands / Puerto Rico 2010
Newer Posts Older Posts Home
Subscribe to: Posts (Atom)